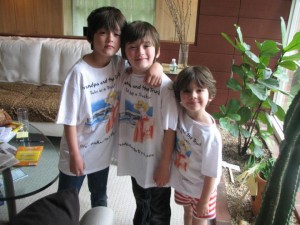 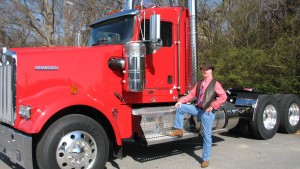 If you like what we do–then please support our efforts.

We are the ONLY stories written for little kids by a 30-year trucker who won awards for his expertise and his author partner (her work appears in Wall St. Journal, Providence Journal, and a host of others.) In addition, she’s a 30-year teacher.

And we’re endorsed by the two biggest trucker groups–OOIDA and WIT.

So, if you support American truckers and they hard job they perform, support our books by buying them.

We sign as author and personalize to a specific child if you put that in the instructions.

We cannot produce the rest of our series (6 more books, each set in different geographic regions) without your support.

Why should teachers support us, too? Grandpa and the Truck books are written by a teacher, and teach geography (and a whole lot more.) We’ve included table of contents, questions, maps, trucker terms.

This fall the author will begin a series of auditory books–the stories she and her husband have created.

Help us bring to the public the very real and exciting life of the American trucker. You can do this by ordering books from this website. They make great children’s gifts and help the image of the American Trucker. 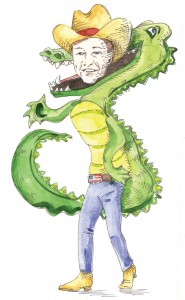 Had a talk with a recent buyer of our Grandpa and the Truck books. It seems she found us on the internet, when she was scouting around for a baby “onesie” (all-in-one outfit for you who don’t know.) You see, she’s expecting their first child and husband is a trucker. She wanted to get books that an actual trucker team writes (trucker and published author wife.)

She wants to be able to read the child the stories, showing what Daddy does when when he’s away.

Smart thinking on her part.

And if it’s a girl child, book 2 has “Girl Truckers” as its second story (each book has two) so the little one doesn’t think only men can be truckers.

Books 1 and 2 are available now, with more in the pipeline:  “How This Trucker Saw the Woodstock Music Festival”…”The West Virginia Coal-Mining Road”…”Truckers Love Their Big Rigs”…are all being readied.

Buying our books will enable us to continue with the series that accurately portrays a long-haul trucker’s life on the road.

It will also teach your child amazing things.

If you buy from us (at this website,) we can autograph your book(s), too and personalize them to the child (tell us his/her name.)

If you’ve already bought, we thank you…as does our trucking industry, for we’re the only ones doing this–telling of the important job our nation’s truckers do for the American economy. We appreciate your help. 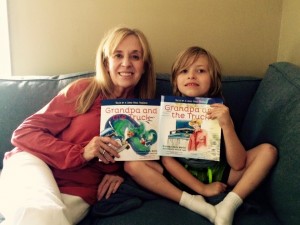 Our Newest ‘Fan’ and School Reviews of Our Show…

Suzanne Souza bought Grandpa and the Truck books for her little grandson, Eddy Gomes. Dad says he’s our ‘newest fan’ and he ‘loves your books.’ Book 1 and 2 each have two exciting, professionally-illustrated stories, maps, questions to go along with story line. Little readers go on a ride with the trucker, in the big rig. You can order each or both at our website www.grandpaandthetruck.com. We personalize and autograph, too.

School Presentation Reviews Coming In….(We invite other teachers…parents to contact us should you wish a school visit of our colorful and exciting show.)

“I was very happy with the presentation of Grandpa and the Truck at Ranger School. The students were super-attentive and involved. The students kept on track and involved for the entire time and for that to happen in a space of 30 minutes with kindergarten,1st and 2nd grade students is a real testament to the program.

I know it is their intention to bring trucking’s importance home to students, while we teach geography…nature…American diversity…via a vehicle they love–the big rigs. I was really impressed with the presentation.”

From Media Specialist for Tiverton schools (The following is quoted material from Mr. Zanghi’s review of our performance.)
Colleen,

“Thank you for your visit to our School’s. Your presentation was an exciting blend of media that truly engaged our children. They especially enjoyed the slide show and interactive mapping activity. The students (K-2) were attentive and involved during the entire time.
The presentation really demonstrated the importance of trucking to students through the use geography, nature and diversity. They love the Big Rigs.
The Librarian in me really loves the non-fiction elements (Table of Contents, Glossary, Maps and Inquiry outlines) found in each of the Grandpa Stories. Thank you again for this wonderfully informative and entertaining presentation.”

From Michelle Loxley, IT professional with Brown Univ.

“As an IT professional and mother of two young children, I have seen many multi-media presentations and presentations targeted to children. I attended the Grandpa and the Truck presentation at Ranger school and was very impressed with Ms. Mellor’s ability to engage the children with the subject of trucking via a range of music, images, and educational visual aids. The presentation not only informed the students about trucking and the role it plays in our everyday lives and economy, but also geography, weather, and communication. The children were excited about the subject and responded to Ms. Mellor’s questions eagerly. I think the Grandpa and the Truck books are a great way to incorporate core educational concepts with engaging stories.”