How “Grandpa and the Truck” books…a hospital database manager, and a seriously-injured trucker and his wife came together on life’s journey. 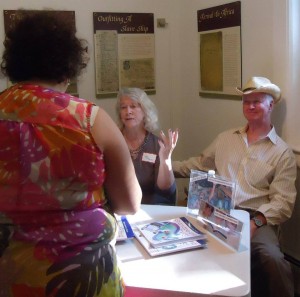 In Hawaii, a few years ago, I met California’s Colleen McGuinn at a luau when my husband and I visited the ONLY state this long-haul trucker had never been to (we tell school children audiences: “There are no water wings sizable enough to float a big rig.”)

While there, we got to talking about a long-haul trucker’s life…the hurdles…the excitement (pic to right shows us explaining, at a book show, what truckers do for America.)

While grabbing some well-deserved shut-eye in the cab, of his big rig, in Oakland, California, Jerry was attacked by a gun-wielding assailant who broke in and shot him in the stomach. A former soldier, the trucker lunged forward and warded off his attacker who fled. But Matson suffered serious injury.

At his first hospital, he fared poorly. Infections raged and his wife, a retired ER nurse, saw little improvement. A local TV station stated that wife Janet slept in local hotels and on one occasion ‘in her car.’

When Database Manager for Saint Francis Foundation, Colleen McGuinn heard of their plight, she recalled the Grandpa and the Truck authors she met in Hawaii and set in motion a plan to help. With the approval of McGuinn’s boss, Kevin Causey, Foundation Board Chair, Tom Klein, Case Manager, Sara Lee, Linda Newton and Darlene Brady, Jerry Matson was moved into Saint Francis’s Burn Unit (because of type of wound he sustained); he was given a skin graft; and he is now on the road to full recovery.

And Janet? She’s been moved to a hotel, with room and meals for one full month, paid for by the Foundation.

Just one example of the larger community and a special hospital stepping up to help a trucker family in need. Here’s the TV station story, and pic of Database Manager, Colleen McGuinn, is below. 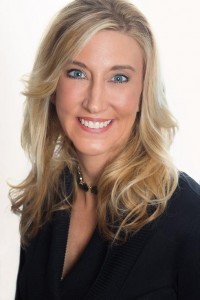 As one voice representing trucker nation, Grandpa and the Truck thanks you, Colleen McGuinn and your colleagues, for your significant part in all that transpired.

(Readers:  Got your own story of a long-haul trucker who either got or gave unselfish help? Send the contact info to us… We’ll write it up and publish….If we’re personally involved, we’ll like it even better!)

And if you want autographed/personalized books for little ones, order them, by going to the right of this column, and clicking “Buy Now.”

Thank you. We work to get a positive image of our nation’s truckers out there…