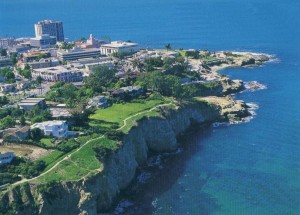 There it is–looking oh so pretty, but pretty darned impossible to find if you’re a trucker not familar with Spanish…

The dispatcher, Howard Jolly (I kid you not—that was his name), told my hubby he’d need to go to La Hoya…and that’s what hubby remembered.  Oh, my man was methodical and always prepared.

Hubby’d been trucking for years and he knew to write down all of the addresses.  It was well before the time anyone had a GPS strapped to the dashboard. He wrote it as it sounded: La Hoy-a.

You see, truckers need to be attentive to details and find destinations on their own.

After all, it’s not like a trucker manning a big rig can pull that baby up to a corner and yell out, to any passerby: “Hey, fella (or ma’am,) do ya know where La Hoy-a is?”

No, siree, that won’t work.

Ok, so he went all over the region he’d been directed to, and he just couldn’t find La Hoya, anywhere.  It wasn’t even on the map, for God’s sake. He looked and looked.

Now, at the time, there was no Siri on the cell phone…No Google to look something up…No anything that takes “stupid” out of the equation. He was on his own.

Finally, on his third go-around in the general region of 12 miles north of San Diego, he caught a break.  Pulled alongside another trucker who solved the mystery for him. La Hoya was actually “Lo Jolla”…a Spanish word.

What did this experience teach trucker Paul Wesley Gates?  How very difficult it must be for Spanish-speaking truckers to understand American road signs.  They’ve got a whole lot more to process than he did with understanding that one town name.

Yep, this La Jolla  (pronounced La Hoya) thing gave him new appreciation for what his Spanish-speaking brother and sister truckers go through as they perform their jobs. And he salutes them everywhere…

***Stay tuned for the Grandpa and the Truck stories (first children’s book went to the printer yesterday—ready soon.)