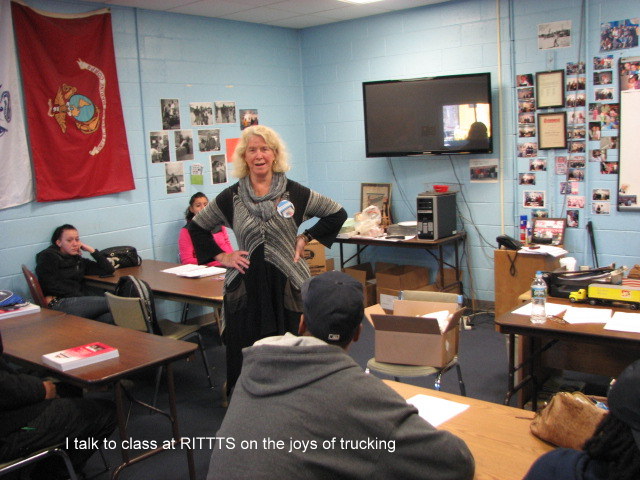 I go into the classroom again, after a break of some years, but just like bike-riding, it all comes back.

Wow!  That was fun! Went to Rhode Island Tractor Trailer Training School Thursday and spoke before the class of new recruits, about 25 young men and two women. This retired, 30-year schoolteacher found it thrilling. Back in the saddle, so to speak.

Told them all about what drove husband and I to write the Grandpa and the Truck stories…how we wanted to share the stories with little ones everywhere..how a trucker’s experiences are too wonderful a treasure trove to ignore.

Told them they’ll be the future heroes and heroines on the road…the ones little kids will wave to and thrill at.  That fact brought forth smiles, as they doubltess remembered their own occasions of seeing their first big rigs and their drivers.

I left them with the idea they have big shoes to fill, those of the honorable men and women who drove the big rigs on the nation’s roads before them.  Let them know many of us recognize the most important job they do, bringing America’s products to market, against often-impossible odds.

When we were done, a young man (former Iraq vet) jumped up to help us carry our box of materials out. I gotta say:  I was moved by his help.  I’ll do a story on him (for this site), for he’s the kind of trucker I want to see on the road.  He’s had multiple life experiences (in National Guard as E-5); he’s trucked before; but now he’s getting his license in Rhode Island.

Yes, I found the day exhilarating….I know: I’m going to like my new gig as teller of the tales of truckers and their big rigs.