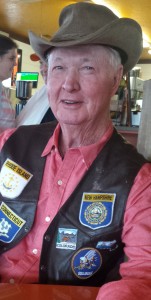 So, you’re afraid of what’s in the vaccine?…

Like many of us, Paul had a lot of life experiences, while working different jobs, before he became a long-haul, big rig owner- operator. One of those was his infamous sausage factory job. He was 16 and you know how that works: 16 year old’s always think they know everything. They seldom pause to digest cautionary advice of experienced workers more senior to them.

So, his supervisor told him how the machinery worked. But just like the scene of Lucille Ball in the candy factory where the candy kept going too fast on the assembly line and she got all mixed up, Paul had a similar thing happen to him in the sausage factory.

His job was to run the filling machine. The sausage casings came through, one at a time, in rapid succession and his job was to press a button to fill up each sleeve with the contents—a mixture of what you probably don’t want to know. Then the filled casings would be tied shut at another station.

But something went wrong and the casings were flying through faster than Paul could operate—or stop—the machinery. What happened? A big pileup on the floor—of contents anywhere but in their prescribed casings. What did he do when he finally got the machinery stopped? Just what any 16 year old would do. Shoveled up the contents and filled those tubes, telling no one in any supervisory role of the mishap for fear of being fired.

There have been many stories in this COVID age of people in meat factories in the Midwest, COVID-infected, but they worked, handling the products that would be shipped to the rest of the country. Factory owners declined to institute safety precautions that would insure the health of everyone.

So, next time you hear a person saying they don’t trust the vaccine, consider the above and multiply this scenario by hundreds of thousands because similar events happen in big food plants across America.

And now, across America, the Delta variant of COVID, an especially virulent strain, is claiming many victims because people fear the vaccine—fear what’s in it….fear the cure will be worse than the disease, despite statistics that show folks are far better off if vaccinated.

Get the vaccinations…. for the sake of all. After all, I used to pack your sausages…I know what you should really fear.